Skip to navigation Skip to content
20
- June
2018
Posted By : admin
No Comments
Arykanda

When I arrived at the Antalya Conservatoire as a new Docent, the school orchestra was rather small and had very few wind instruments, if any. The ensemble had almost no performance experience and mostly played what they called "songs"! From that moment on it was my main objective to teach them original string repertoire from the Baroque and Classical periods and a few string arrangements of other important works. 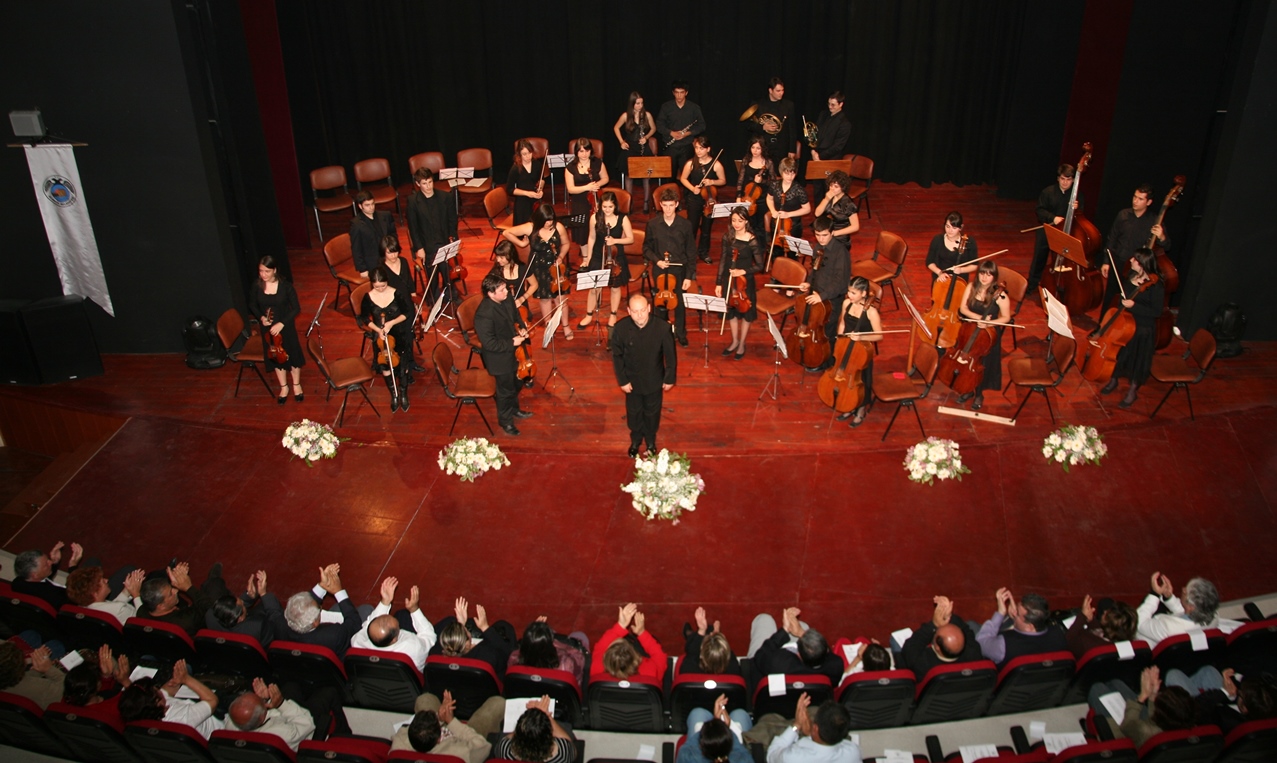 My aim was multi-faceted: creating a stylistic awareness in my students, having them gain a hands-on performance experience and, at the same time, bringing polyphonic concert music to audiences who may never had the chance of hearing an orchestra.

Concerts at amphitheatres from Antiquity

Between 2007 and 2010 we played nearly twenty public concerts in and around Antalya Province. We played at schools, shopping malls, university's events and more importantly we played at the many ancient Greek, Lycian and Roman amphitheaters along the Turkish coast such as Kaş (Antiphellos), Xanthos, Side and Arykanda. 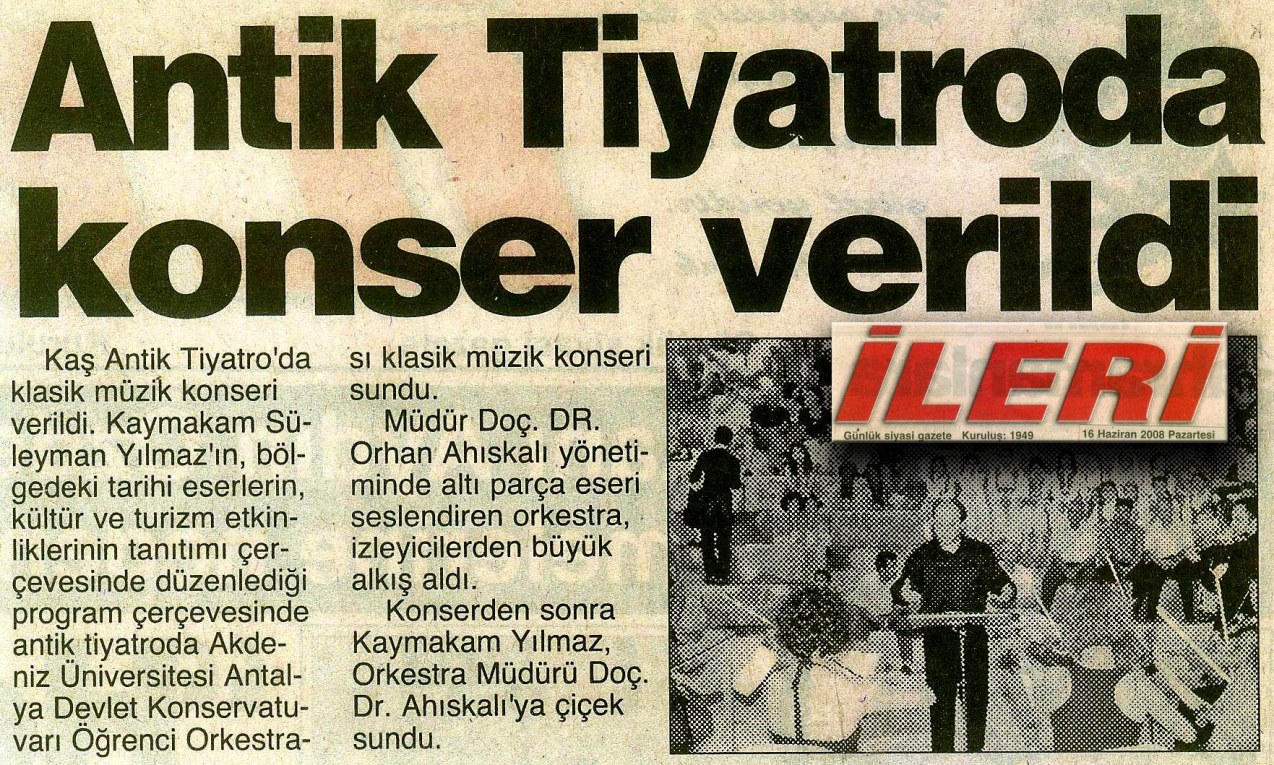 The ancient Greek amphitheatre at Kaş was one of our regular venues. As no stage building had survived there we had to play on the dusty ground and with a single spot light after it started to get dark. But, since there was no stage buildings here, the audiences were able to marvel at the view of the Mediterranean and the Greek island of Kastellorizo just behind the orchestra. 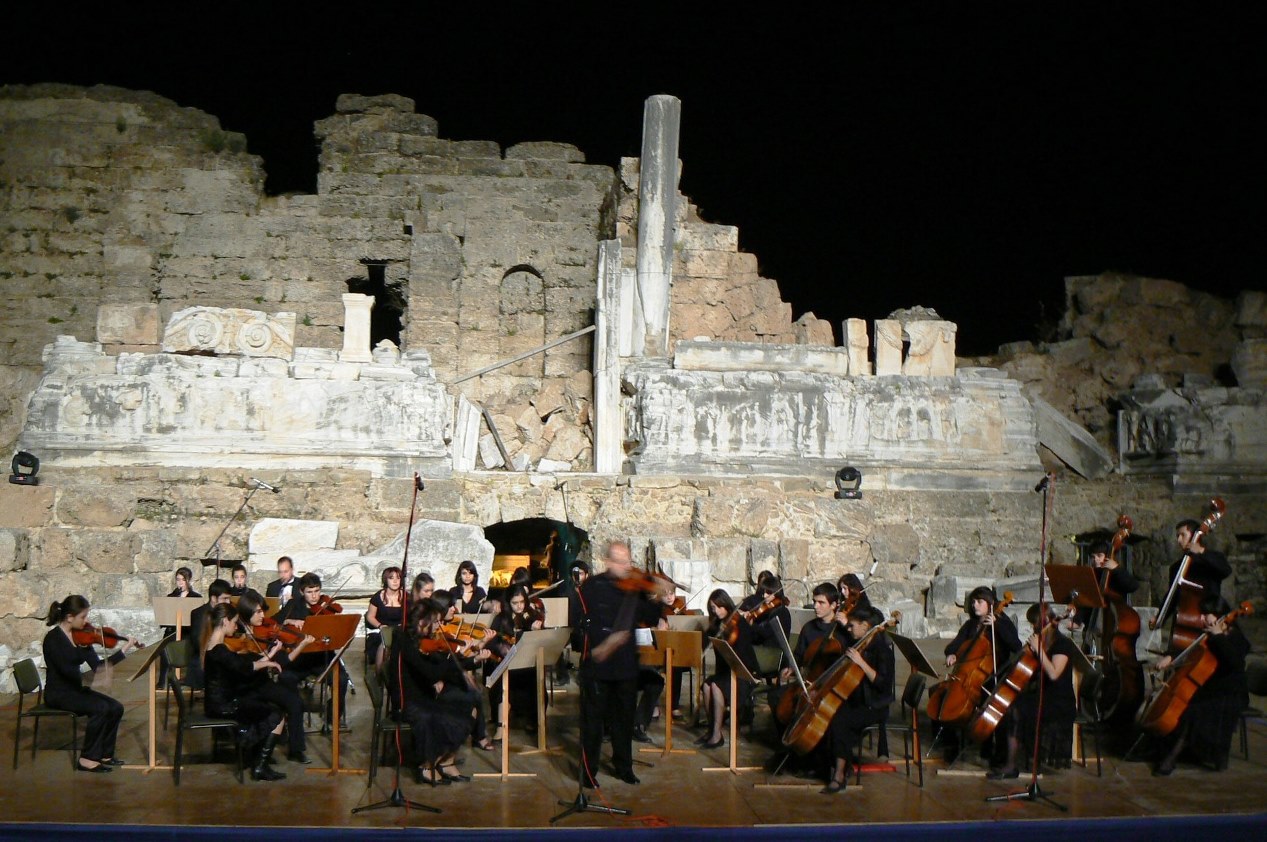 Our first big concert at an ancient theatre was in Side. It was still rather early in the season and a few wind instruments were slightly damaged due to the damp and chilly air. Over 1600 German tourists who attended the concert were given blankets to keep warm. The lack of a backstage and public toilets had been a major problem! 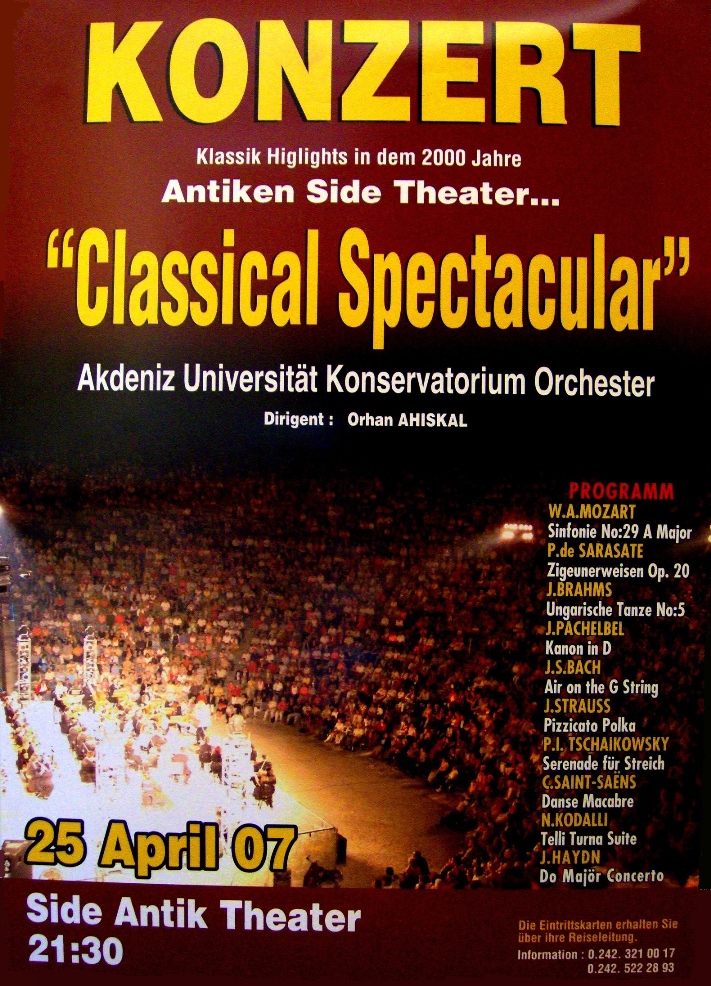 A first in Turkey - concert in a stadium

I was always looking to bring Western concert music to bigger crowds in Turkey since, sadly, the majority of the Turkish population has no access to Classical concert music. Such an opportunity rose with the local football team, Antalya Spor. We were to play on the field before a match in February. Logistics for such an event with virtually no trained tech personnel and little to no support from the university administration made the organisation a nightmare.

Our first attempt at the Atatürk Stadium in downtown Antalya failed due to heavy rain. A second game was then planned in early March. All orchestra members were loaned(!) Antalya Spor jersey t-shirts for the concert. It turned out to be a sunny day and we played the first ever Classical music  concert in a stadium in Turkey. Being before the age of wide-spread smart phones only a couple of newspaper articles are the proof of this event. 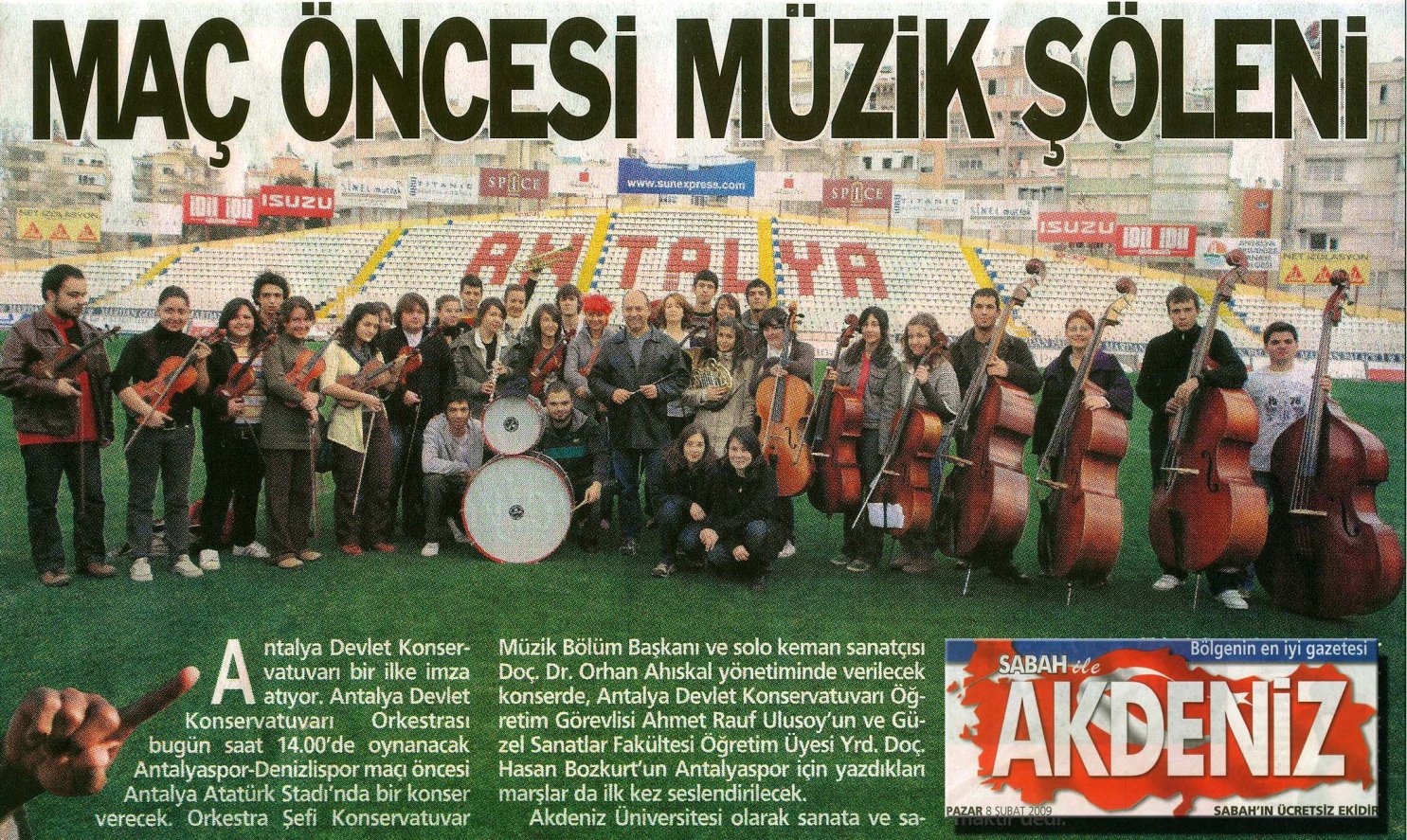 You are probably wondering why this little blog entry is titled Arykanda. Let me tell you.

Arykanda is a Lycian city dating from the 2nd Millennium BCE. Unlike the other ancient sites so far mentioned in this article, it is approximately 30 km inland in the Taurus mountains. In order to reach the theatre of Arykanda, one has to walk uphill for 15 minutes following the hour-long curvy drive from the coast.

Summers in the Antalya region are very hot. On days when the wind blows from the South, it brings humidity and that in return keeps the temperatures somewhat lower, around 40°C. If the wind blows from the North, then all humidity disappears and temperatures soar. Our concert, which was televised without our consent, took place on 25 June 2007. Forecast for the day was predicting up to 55°C! 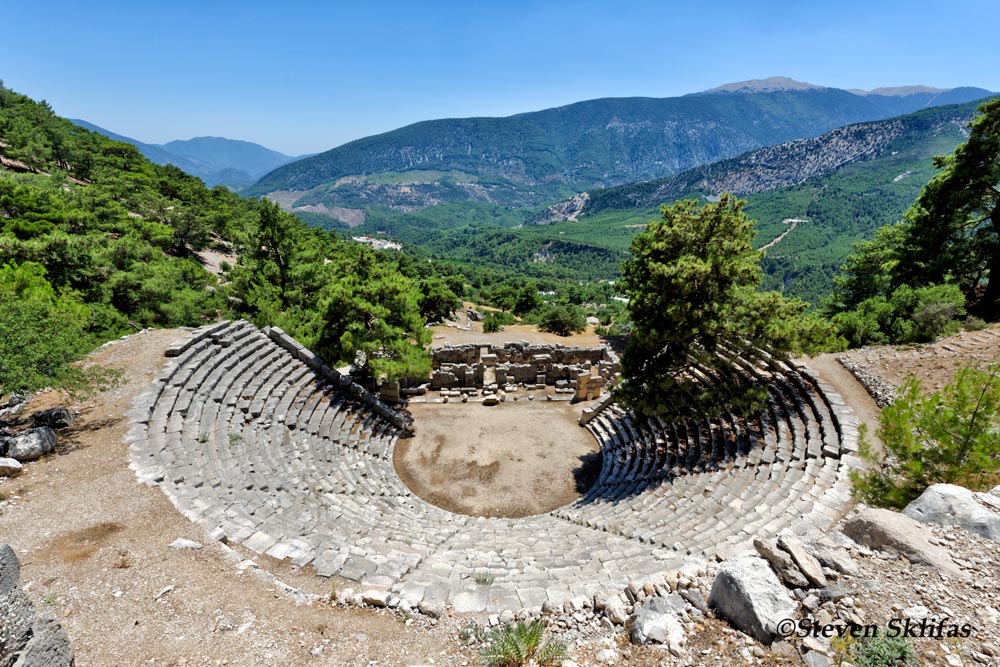 The Greek styled ancient Hellenistic theatre at the Lycian city of Arykanda, in the Antalya province of Southern Turkey.

Concert was supposed to begin at 9 pm but we were asked to wait for the Kaymakam, the local mayor, who was stuck in traffic trying to reach the site. In the meantime the rock steps of the ancient theatre had been completely filled up with an eclectic audience, which included many European tourists, friends and families of the orchestra members and the local Yörük (former semi-nomads) people, who established a stark contrast to the tourists with their traditional dresses. There were also the military police patrols, jandarma in Turkish, for security reasons.

A local wine company had a tasting stand and by the time the concert began all the wine had already finished. As I found out years later some of that was actually consumed by my students!

All musicians who play outdoor concerts know that one always have to carry clothespins/pegs to stop the sheet music from flying off the music stand. I had consulted the local administration concerning the possible wind and had been told that the big rock wall that rose couple of hundred feet behind the theatre actually prevented the wind. As we began playing a Mozart symphony, this statement was quickly proven wrong as pages of notes were taking off the stands in the hot whirls of wind blowing above the orchestra. As I was the only one with hands not playing an instrument I was catching sheets in the air and placing them back on the music stands. As I was not able to catch all the sheet music flying in the air I began calling the nearby audience members with a finger to crouch by the stands and hold the music down.

The concert was received really well by our eclectic audience possibly because of our heroic battle with the wind that night, I don't know. A couple of months later a large and flat package arrived at the Conservatory in Antalya. Out of the package came a framed ink drawing depicting our concert at Arykanda. At the bottom an inscription by the artist Hüsnü Öncüoğlu read:

"Tonight in front of the Great Rock, Orhan Ahıskal proved the power of music. I greet him with respect..."

Unfortunately I have no photographs from that evening, however, the drawing below has a very special place both in my heart and on my wall.