As part of my project Düştüm Yola (I Hit the Road), I began in 2014 to travel to remote locations in Turkey, where no concert life existed or even perhaps no concert had ever taken place. Düştüm Yola consists of solo violin recitals and a series of talks and lecture-recitals at schools to introduce various aspects and history of Western music culture. One of the first places I went to was Hasankeyf, a medieval town on the Tigris River that draws the Eastern border of ancient Mesopotamia, the cradle of civilizations.

According to an article at smithsonianmag.com "more than 20 cultures have left their mark at Hasankeyf, carved thousands of caves and left over 300 medieval monuments. The Romans built a fortress there ca. 300 CE to patrol their empire’s eastern border with Persia. The city became a Byzantine bishopric in the 5th century and was conquered in 640 CE by the Arabs. Hasankeyf was then ruled successively by the Turkish Artukid dynasty, the Ayyubids (a clan of Kurdish chieftains) and the Mongols, who conquered the region in 1260."

"Hasankeyf emerged as an important commercial center along the Silk Road during the early Middle Ages. Marco Polo likely passed over its once-majestic stone, brick and wooden bridge, built around 1116 (only two massive stone piers and one arch remain). In 1515, the city was absorbed into the Ottoman Empire and has since remained a part of modern Turkey." 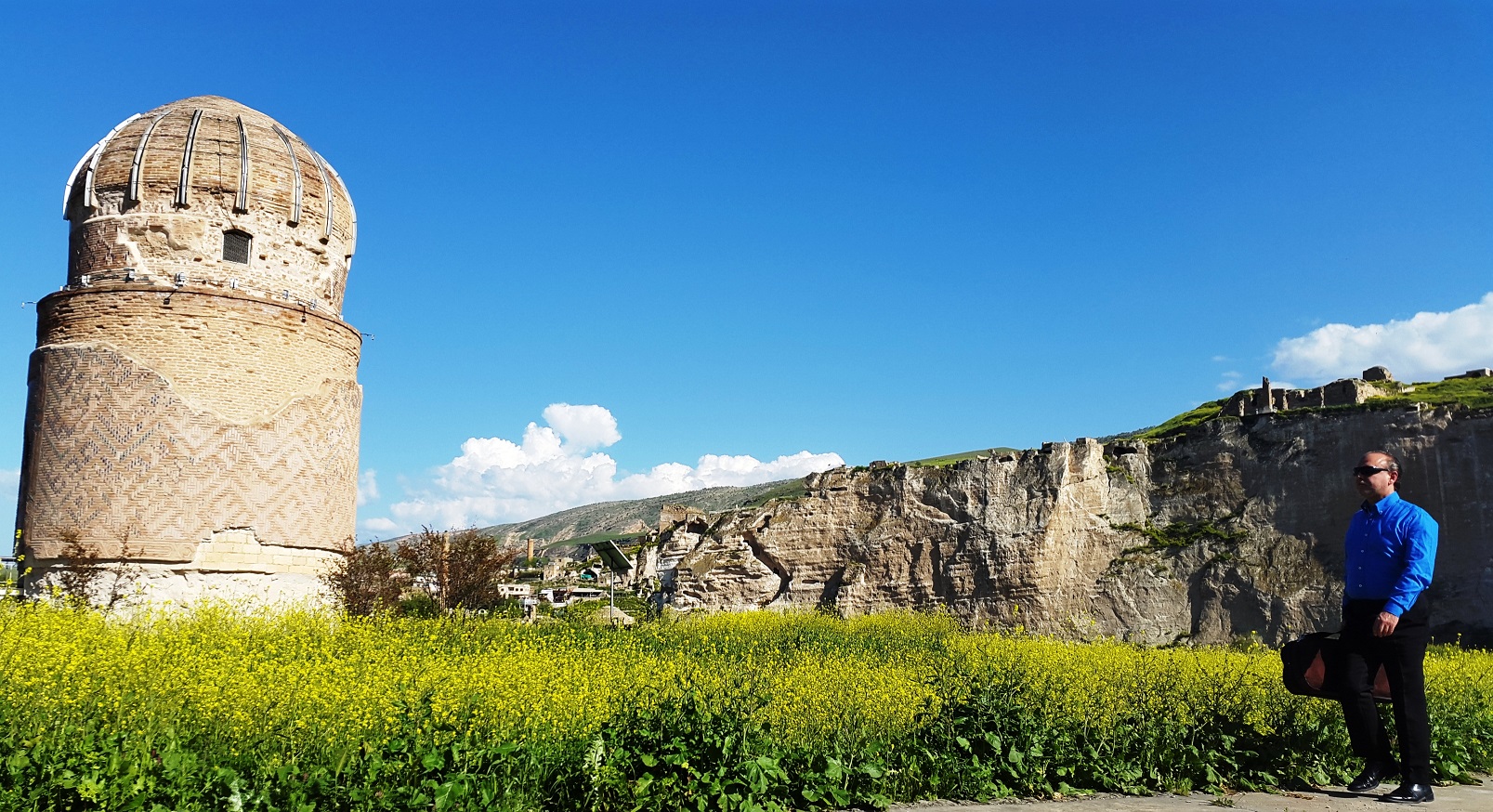 Zeynel Bey's Tomb in Hasankeyf, dating from 1473, has since been lifted and carried away!

Open-air recital
The recital was supposed to be in open air since no other concert facility existed but had to be postponed a couple of days due to inclement weather. In the meantime I played another recital in Diyarbakır (you can read about it here) and returned to Hasankeyf a couple of days later. The weather had improved very much and it turned out to be a beautiful evening on the banks of the Tigris River.

I was playing a very challenging program, for both the performer and the audience, of rarely performed works by Turkish composers and the same repertory was programmed for Hasankeyf, too.

On the eve of the recital I was placed in a small tent made of thick angora wool since there were no buildings around. This wonderful element of semi-nomadic Yörük culture was probably great to keep one warm on a cold winter day, however, on this warm mid-April day it was like a sauna inside. Nonetheless, it was the only possible dressing/warm up room available.

Mohair-wool-tent as my dressing and warm up room. No place to stand up!

Megaphone announcement
As I was getting ready for the performance I heard an announcement outside made through a megaphone. A vehicle of the local administration was driving around town to inform the locals and visitors of the evening's special event. A man's voice crackled through the megaphone:

"Tonight at 18.30 there is going to be Orhan Ahıskal Violin Recital. Everyone is invited."

What a great idea! I thought but something sounded not quite right. I listened again to the now not-so-distant voice more carefully. It said not Orhan Ahıskal Violin Recital as I had thought it did but "Orhan Ahıskal Violin Residence!" In a place no recital or even a classical music concert was ever heard, luxury apartments promoted as "residences" were common place; the word "recital" (that the announcer may have never heard before) had, in his mind, become another that he could relate to. You can imagine my reaction: I couldn't stop laughing. But then the severity of the situation hit me. This was much more sad than it was funny and the underlying cause of the situation was obvious. And who to blame was certainly not present! 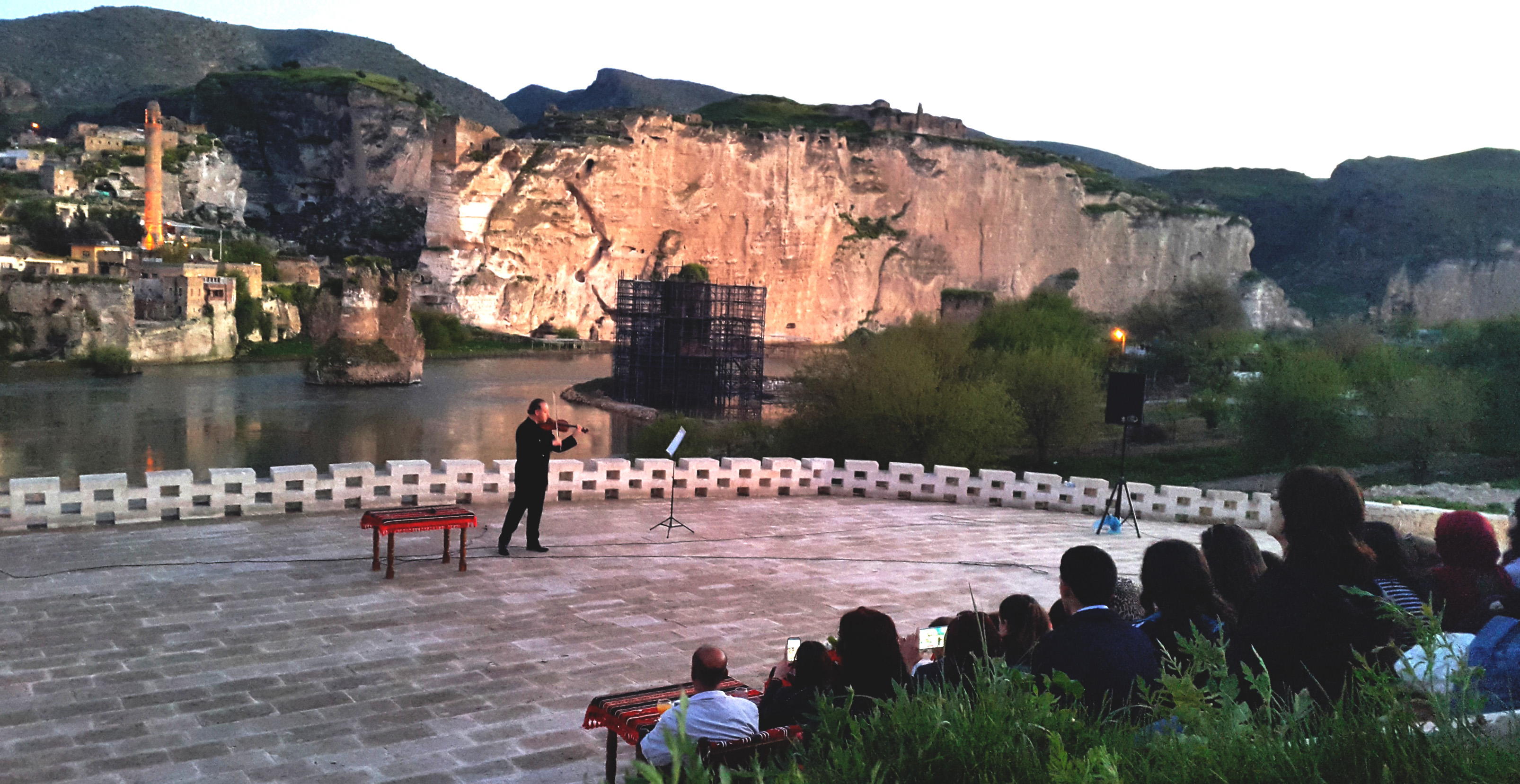 Last-minute change of program
The unexpected circumstances required urgent adjustments. My planned program was simply too difficult to enjoy by unfamiliar ears and it would have done more damage on behalf of Western concert music than any good. I had to test my memory for a different and a more accessible repertory since I had no sheet music with me and, instead of Saygun, Baran and Sun as originally programmed, performed movements from J. S. Bach's work for unaccompanied violin and two of the Vivaldi Four Seasons, for solo violin! The only new work in the program was a new  work written for this occasion, titled "Hasankeyf", by Kurdish composer Rohat Cebe, which I had just premiered back in Diyarbakır.

As the sun set slowly over the River Tigris and painted the sheer rock cliffs behind me a beautiful orange color; the ancient panorama of Hasankeyf became an enchanting view, its music took over and my violin was no more...

Ps. Hasankeyf is to be mostly inundated due to the completion of a new hydroelectric plant on River Tigris. You can find more about that here.