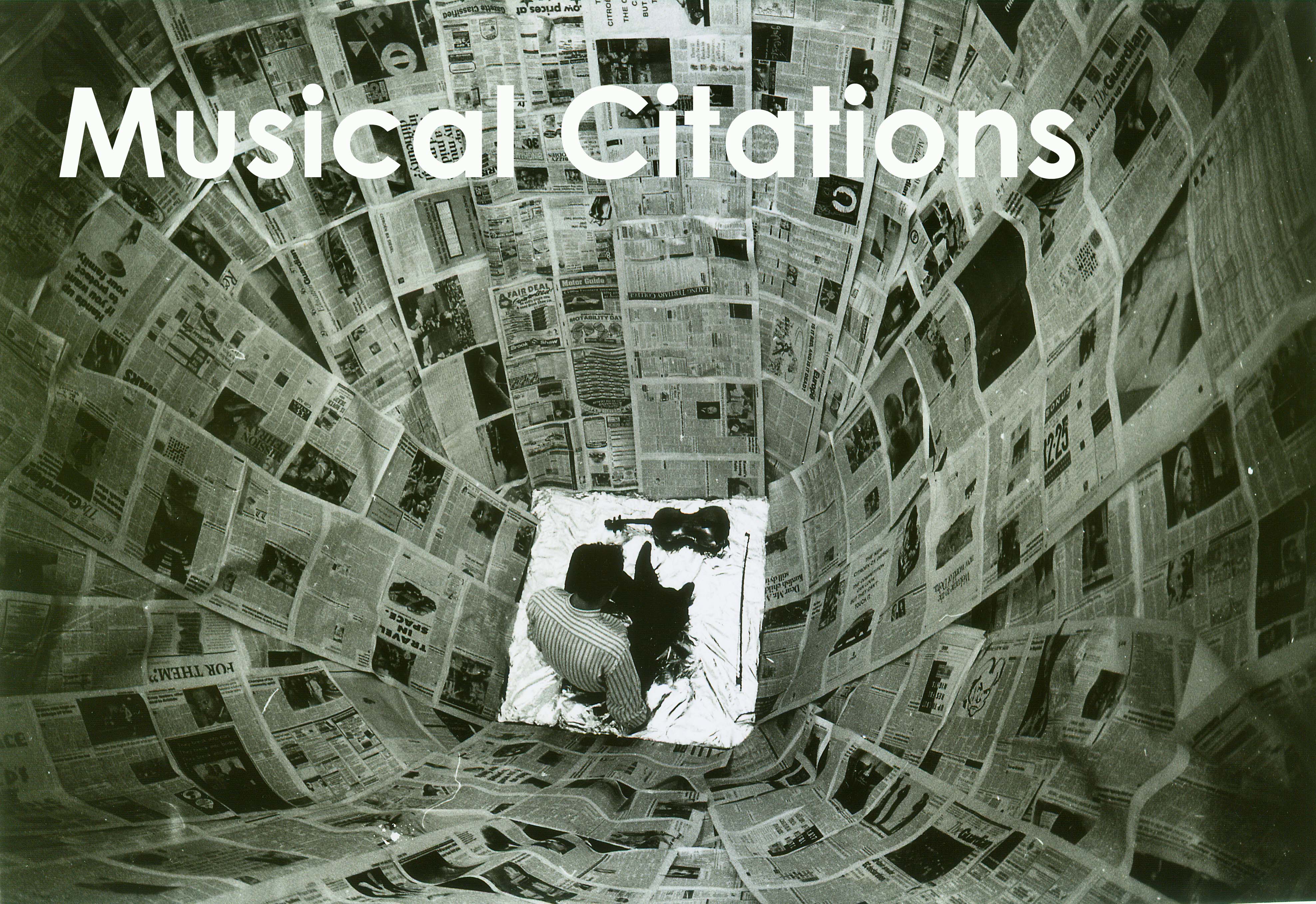 The year I started my graduate studies at the Royal Northern College of Music in Manchester, England, I participated in a unique project, its creator, Selma Göker (Wilson) called Musical Citations. Selma was studying architecture at the University of Sheffield. I was a student in Manchester, however, I was living in Sheffield and sharing a house with students of the architectural department at the university. I always had an interest in architecture along with history and archaeology and was willing to join in the projects of the students of the architectural department, which included house-rubbing, the same idea as brass-rubbing only with actual houses in the village of Castleton in Peak District, the Winter Architectural School in Edinburgh, Scotland in January 1991, many late night and overnight workings at the department where all the students had their individual desks in a very large studio. I was the late night violinist providing music to support the late night workers. 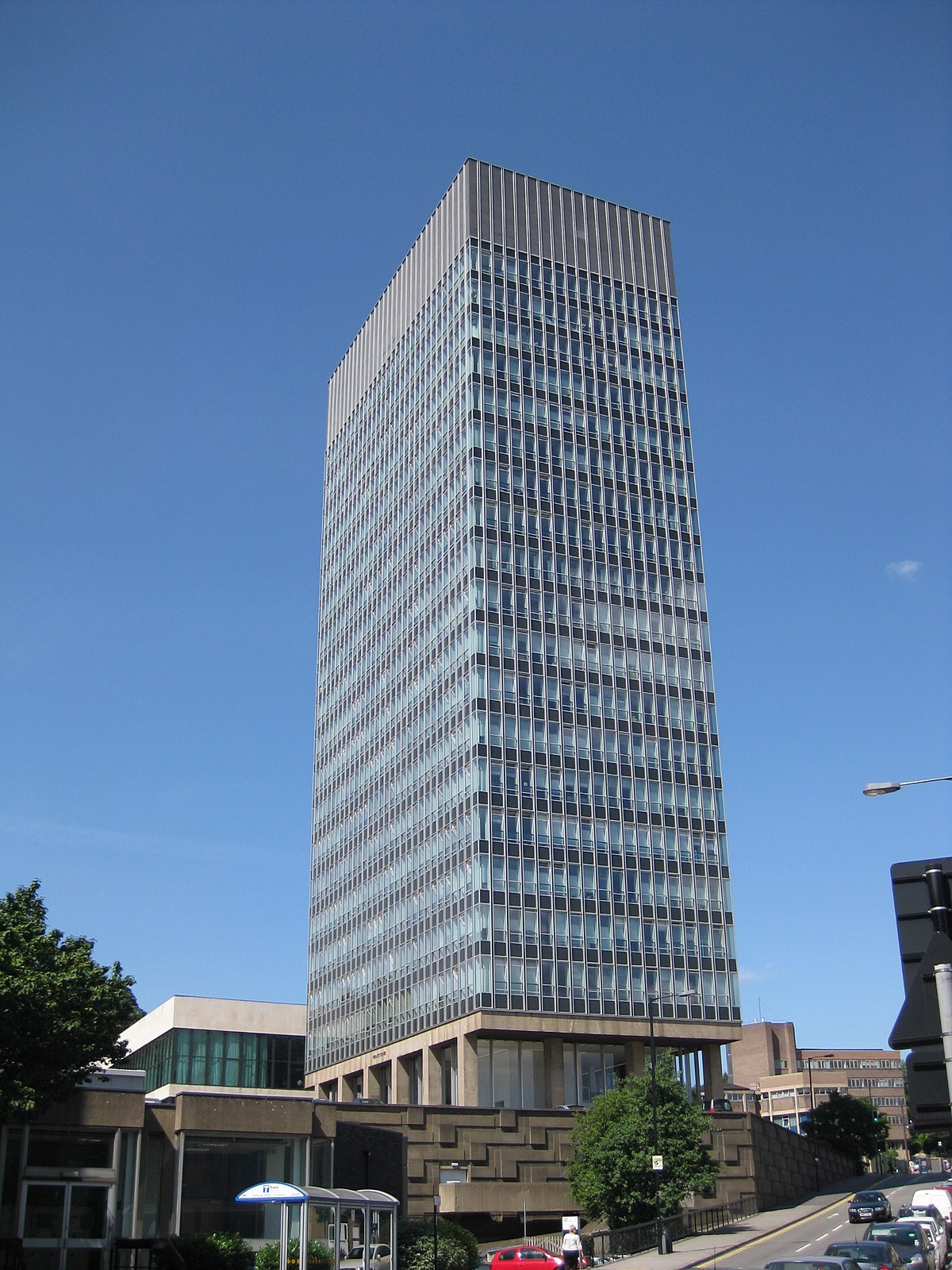 Paternoster
The Department of Architecture was located on the top four floors of the Arts Tower, a prominent 19-floor-building near the Firth Hall in Sheffield. The most interesting feature of the Arts Tower was probably the Paternoster, a 38-car chain lift. One of the very few remaining such elevators in Europe and certainly the highest, the Paternoster was a chain of constantly moving cubicles. Only two people were allowed to board a single cubicle as it moved from floor to floor without stopping. It was the fastest way to reach nearby floors. One had to vacate the cars as they rotated to turn around at the top and the bottom floors of the building. 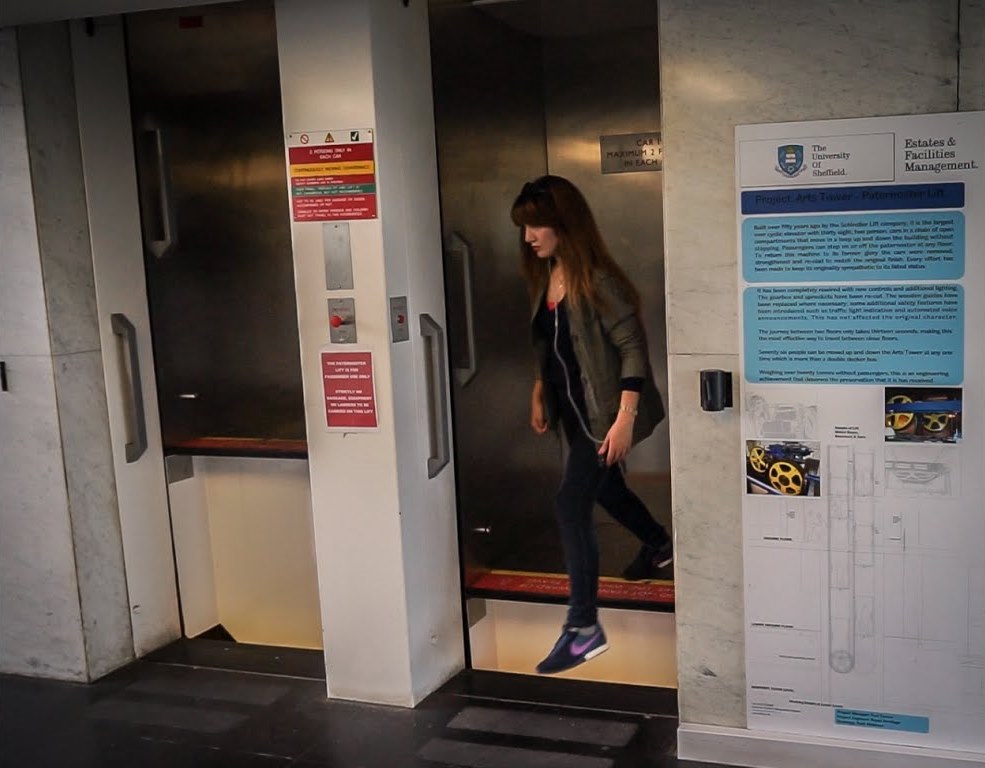 The Well
Between the 16th and the 17th floors of the Arts Tower there was an opening surrounded by a railing at the top like a balcony and here the two floors were connected by a spiral staircase. It was called the Well. The well was the site of interesting, experimental projects of the department and Musical Citations also took place here. 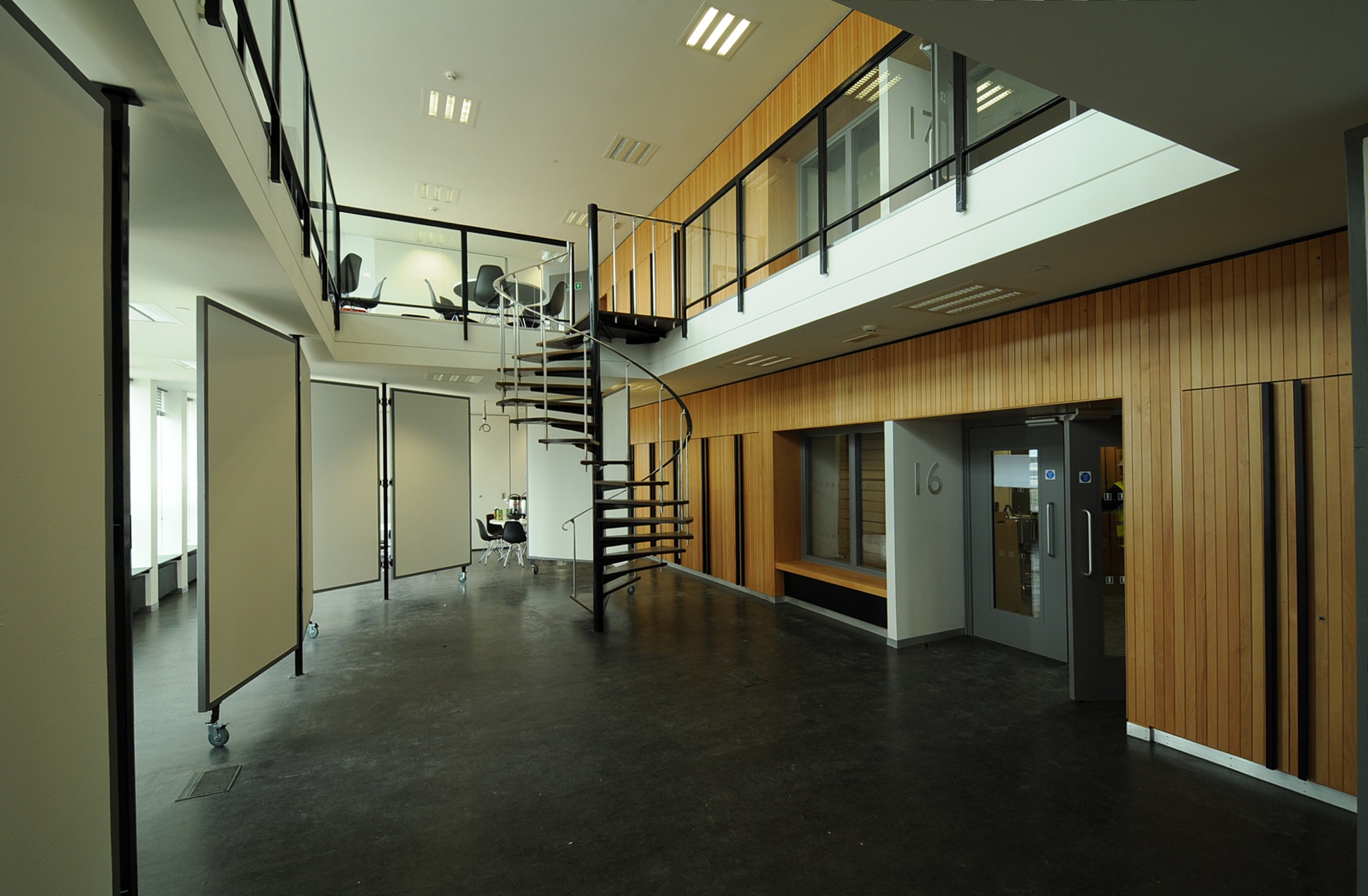 The Well at the Arts Tower of The University of Sheffield, England

Architecture and music
Selma had a special interest in the relationship between architecture and music and always searched the ways the two subjects were interrelated. Le Corbusier and Iannis Xenakis, and their ideas on music, architecture and mathematics were frequently discussed. Architecture was frozen music and music was melted architecture.  Musical Citations were an experimental project to explore the relationship of music and architecture by creating different environments for performance to be possibly realized in different places in a concert hall building outside of the concert hall itself. As part of the project five short recitals a week apart were organized. Each recital was followed by a discussion, where the outcome and the effect of the recitals were discussed. 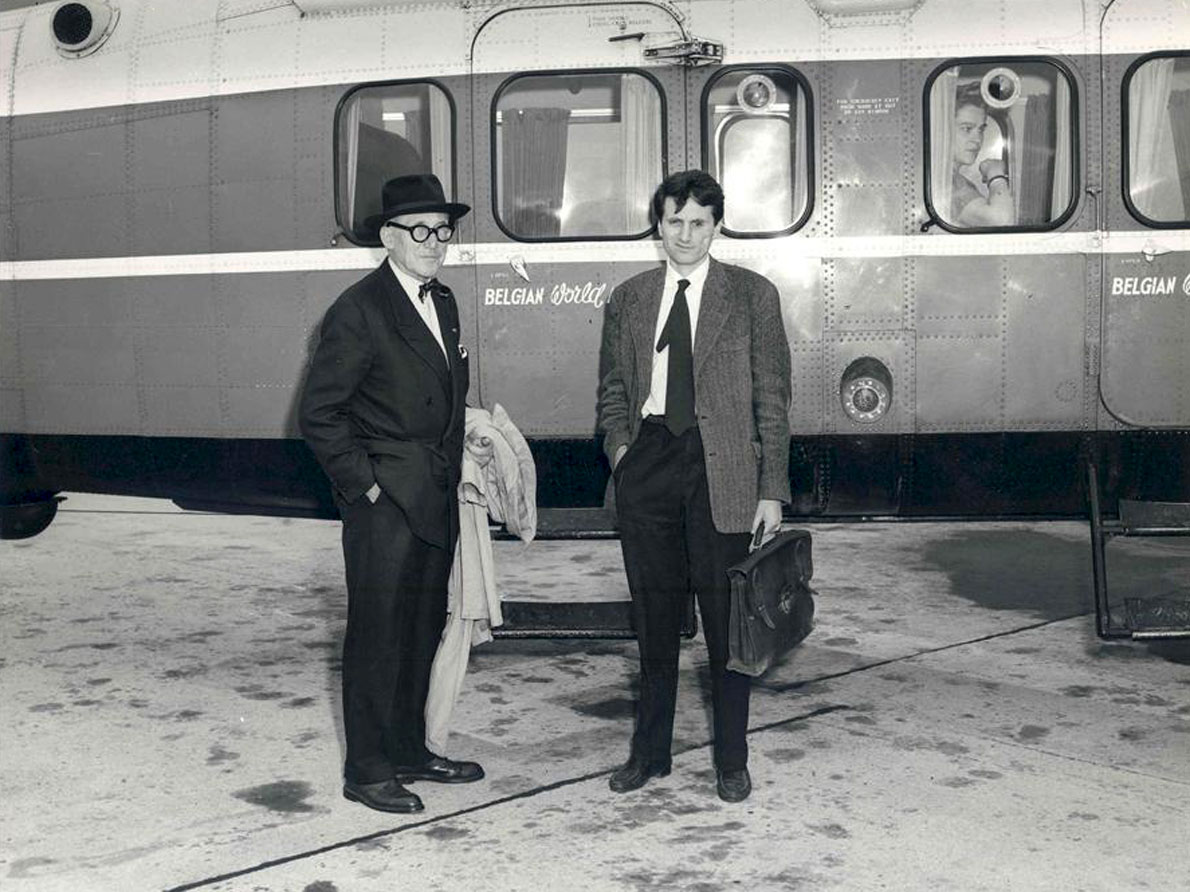 Citation I
For the first recital, where I performed Fantasia No. 10 by Georg Philip Telemann, one side of the well was conceived as the outer wall of a Baroque palace. The folding doors were opened and in these openings mock windows made of cardboard were placed. Here the audience was supposed to be outside the palace, hearing the music from inside and only seeing the shadow of the violinist which was created by a strong light source placed toward the windows behind the violinist. 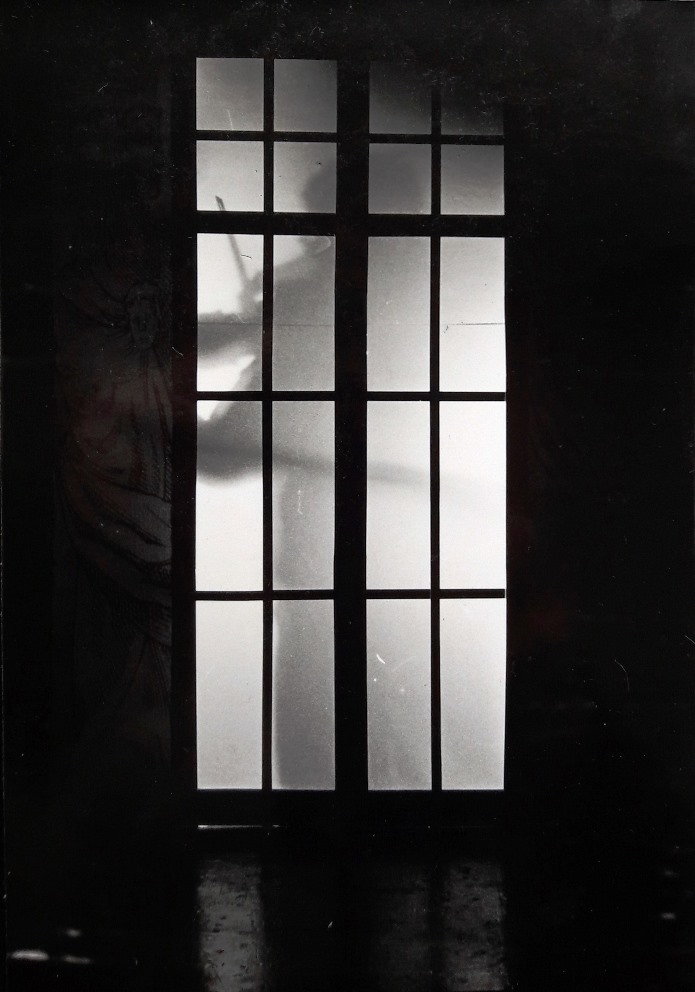 Citation II
For the second citation Selma initially wanted to make the well into a cardboard box however this idea proved to be a little too extravagant for a student’s budget and instead a basket made of newspapers was designed. Since all the sides of the well with the exception of the top were closed and I was placed inside the basket, the audience had to watch this performance of J.S. Bach’s Ciaccona from the floor above looking down on me. For the performance lights were turned off and a single spot light was placed outside the basket behind the newspapers. 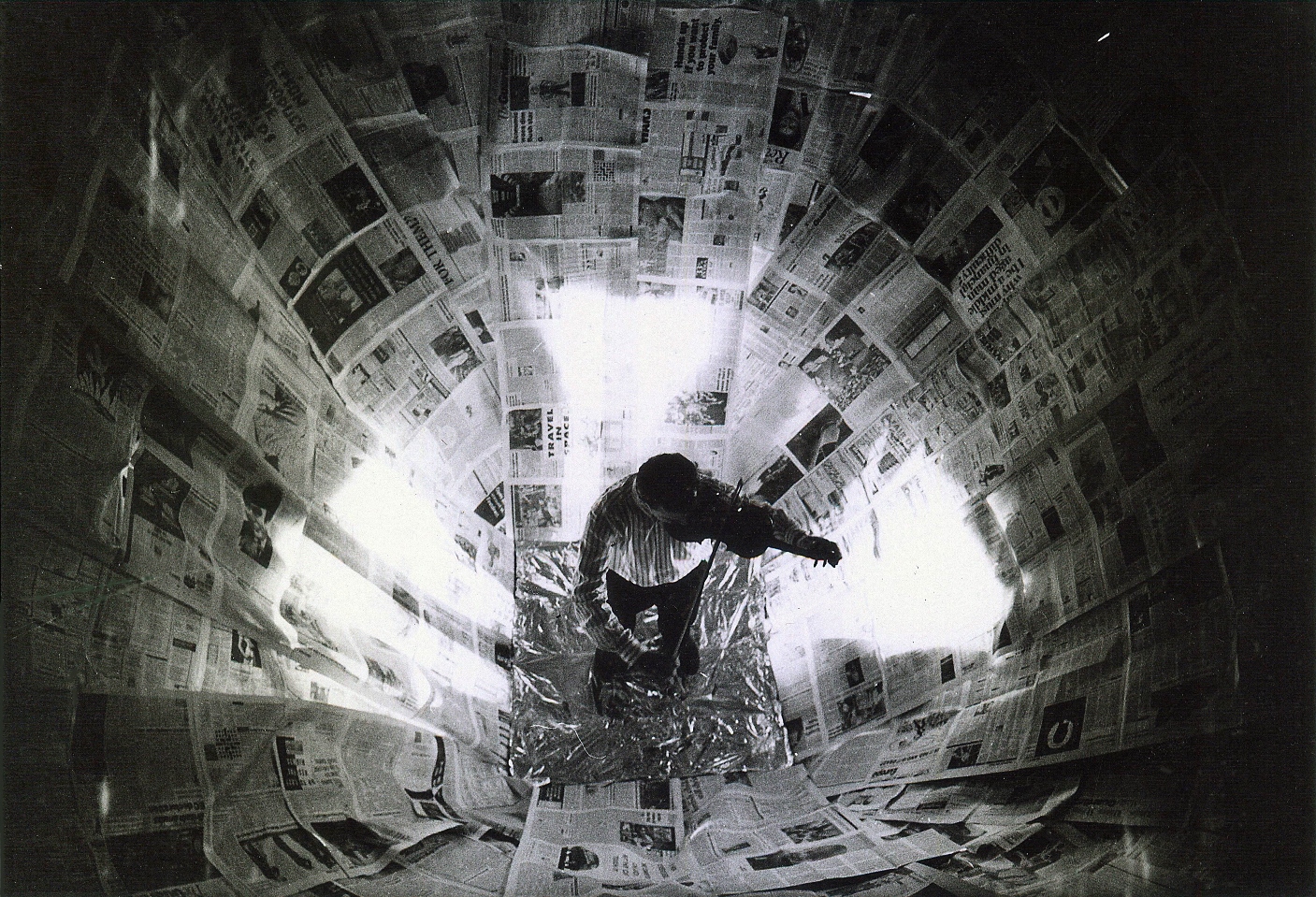 Citation III
For the third recital, a series of platforms of differing heights were placed. I performed the Preludio from J.S. Bach’s Partita No. 3 in E Major and the Sonata No. 2 Op. 27 for Solo Violin by Eguene Ysaÿe outlining the similarities between the two pieces. For each movement I climbed to a different platform and the music was accordingly hung on different card boards hanging from the floor above.

Citation IV
Probably the craziest setting was for the fourth recital in which I performed The Monologue by Richard Stoker and Mikka by Iannis Xenakis. The ever persistent glissandi between mathematically determined quarter tones all over the instrument inspired Selma to place me in the center of a spider’s web. Since an actual such web  required major technical support we went for a mountain climber’s equipment and ropes. First I was hung from the 17th floor toward the 16th and many elastic ropes were then connected to the climber’s ropes which suspended me above the floor. This allowed the web to move freely, responding to my movements. I had two major difficulties apart from performing Xenakis’s Mikka: the robes which came from two different directions toward my torso pressed so hard on my body that my ribs were bruised. We solved that problem partially by placing some padding (cotton socks actually). The second problem was that the main rope that went away directly from my body prevented me from bowing straight as I would regularly. So every time I reached the tip of the bow and my right arm stretched away from my body, I had to slightly rotate my body or pull my right arm backward so to avoid hitting the rope. This recital was videotaped on a VHS tape however as the lens cover was forgotten on the camera, unfortunately, no actual footage remains. 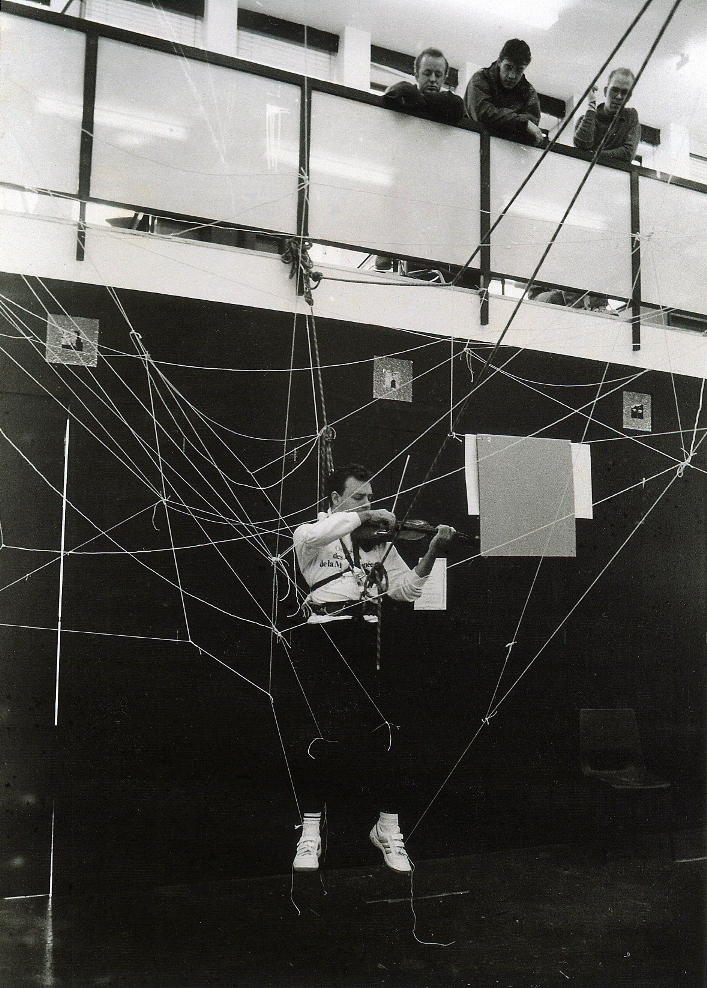 Citation V
Only four citations were originally planned however since they were received really well we added another one where I performed duets with Tom from the architecture department playing the saxophone. 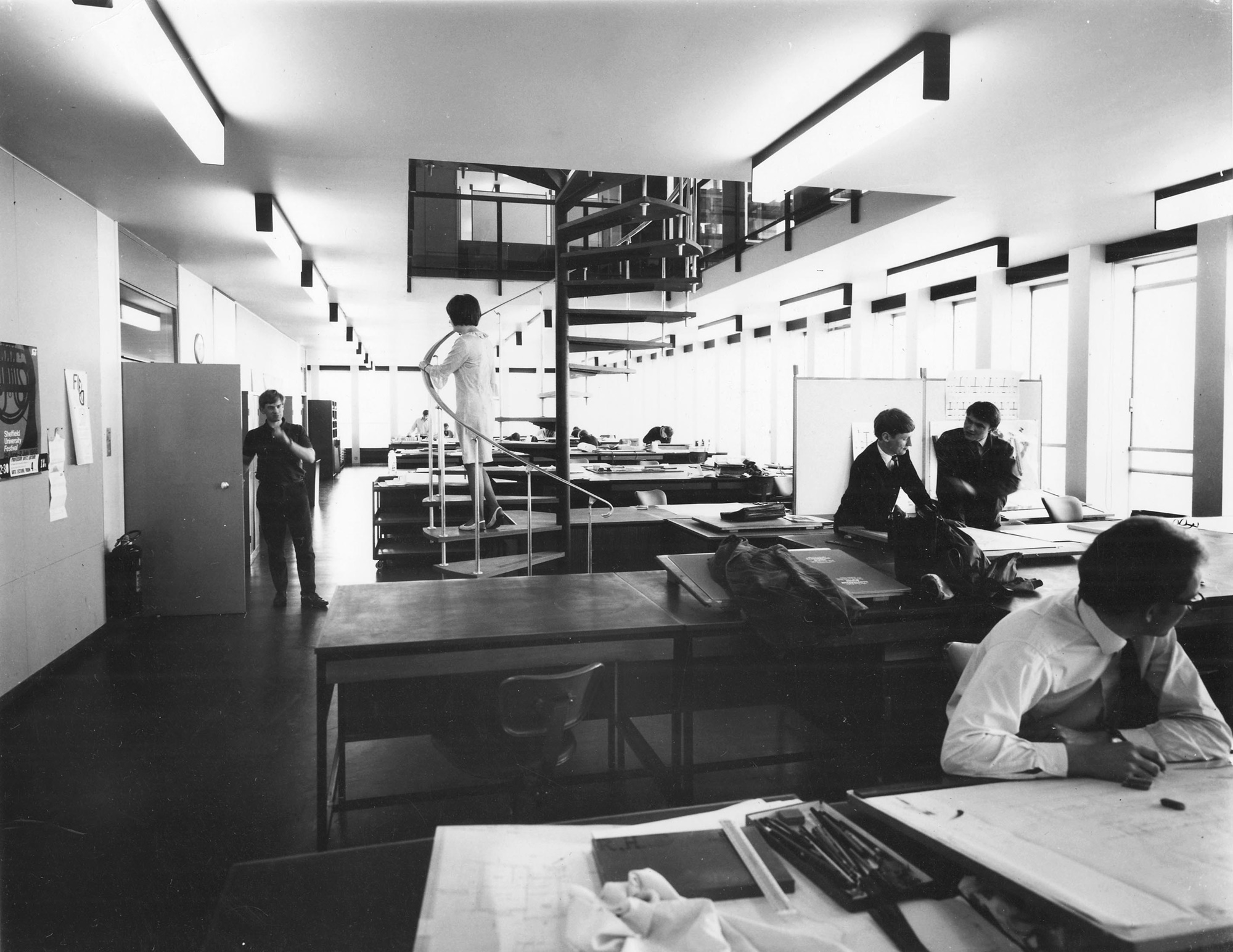 Finally
It can be said that these experimental performances were a good proof that musical performance is not limited to a concert space and can be organized in a variety of places, spaces suitable for the size of the performing ensemble. These spaces can also positively or negatively influence the effect the performance would have on the listener. As we see more and more increasingly, the lighting is also an important part of the live performance however as long as not to interfere with the performance as we also see frequently.

Musical Citations remain the most experimental and unusual musical performances I have ever performed and thank you Selma Göker-Wilson for thinking up the Musical Citations. What a memory!